In our mission to achieve 15-minute cities, it’s vital that we ask ourselves – how do we make towns and cities accessible for all? In particular, the visually-impaired community. We and our riders believe that our e-scooters are key to making a city both green and accessible. However, when parked or ridden irresponsibly, e-scooters are a nuisance rather than a solution for visually-impaired people.

Fatmir Seremeti is a blind influencer, entrepreneur and goalball Paralympian, whose TikTok video about how incorrect parking of scooters affects visually-impaired people went viral in summer 2021. We are delighted that Fatmir agreed to chat with us about his thoughts, opinions and hopes for cities of the future.

Thank you for agreeing to meet with us. Can you explain more about why you have chosen to collaborate with Voi?

Honestly, I think it’s good that companies like Voi are reaching out to communities like the visually-impaired and showing that you care about us – that people with special needs matter. It’s also a way for Voi to educate their users, to spark that feeling of empathy and urge their users to park properly. It’s really not complicated, but people need to be aware that there are many different people in society with various needs. Not everyone is like you. Show consideration, and we will be able to keep all the good and fun things about e-scooters.

You lost your eyesight at thirteen years of age. Can you describe how it changed you and how you navigate through everyday life?

It impacted my life fundamentally. I became very depressed and didn’t see any opportunities in life. But I grew more and more into it as I started getting support and, above all, sports became my salvation. I feel valuable and know that I can contribute positively to society.

You’ve had a long, successful career as a goalball player and represented Sweden in the Paralympics three times, winning a bronze medal in Beijing. How did you get into goalball?

I was introduced to the sport fairly early by a woman who was responsible for helping my teachers adjust to having a kid with visual impairment in the classroom. She could see that I loved sports. At the time, I was busy with more existential questions like, “will I ever find love or get an education?” or “will I ever become who I want to be and be able to be independent?”.

Connecting with goalball also connected me with other people who were in the same situation as I was. People who had already gone through the process and became the role models I needed at the time. They showed me that it’s possible to have a fulfilling life and be independent. I learned that anything is possible and that visual impairment doesn’t limit me. I limit myself. That’s what attracted me most to the game. 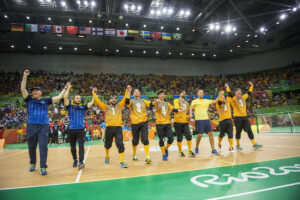 Image: Fatmir with the Swedish Goalball team at Paralympics in Rio, 2016. Photo by Paralympics Sweden.

You’re active on several social media platforms, including Instagram and TikTok. Why did you start and what did you hope to accomplish with your channels?

I realised early on in my goalball career that it’s a small sport that doesn’t get much media attention. Despite all our amazing achievements, we don’t get the recognition we deserve. If that was going to change, I needed to use social media to get people on board.

Nowadays through social media I have an opportunity and responsibility to elevate issues that are valuable for visually-impaired people across Sweden. My ultimate goal is to get people to understand that we are just like anyone else. The only difference between me and you is that I can’t see.

In summer 2021 your TikTok post about irresponsible e-scooter parking went viral with more than 900K views. What made you engage in this discussion?

I’ve been thinking about what we can do about e-scooters for a long time, and how to make people understand that they are creating a problem for others if they park without thinking. It doesn’t take much time to make a difference in people’s lives.

However, I also view the e-scooters as a person who is entrepreneurial, and I don’t want to impede innovation. I was struggling to figure out how to bring up e-scooters on social media in a constructive way. Then one day, I was walking home from the gym and almost fell over an e-scooter. A guy walked up to me and said he felt this was an issue too, despite being able to see. I asked him to help me shoot a video for my TikTok, and so everything happened pretty spontaneously – and I got my point across.

I don’t have anything against innovation or e-scooters, what concerns me is when people drop them wherever without thinking about the consequences, when they can just move it to a better spot. The response was really interesting and exciting, with more than 90% of the responses along the lines of “I’ve never thought about what it means to park my e-scooter like that”.

You’ve expressed that you are not against e-scooters. From your perspective, what could be done better?

The core issue isn’t the e-scooters themselves, the same issue was around way before they came. Bikes are also parked all over the place without concern for other people. However, I would like the debate to centre around how we can become more empathetic and care for each other rather than focus on finding a scapegoat. I experience issues with silent electric cars too, but I think it’s dangerous and foolish to blame all issues on one field.

The core issue is that we lack empathy for one another. It takes 30 seconds to park your e-scooter an extra metre away, alongside a wall instead of dumping it on the spot. You are not only doing yourself a favour, but others too.

If we zoom out a bit and look at the bigger picture. What would you like future cities to look like?

I would like a city with as little car traffic as possible. A city where it’s possible to move around in different ways that are both smooth and environmentally friendly. But I would also like smart parking solutions for e-scooters. I’d like us to plan better for future transport modes that make it possible to travel collectively but individually. Whenever we build and plan the city, I’d like there to be dedicated zones like footpaths and bike lanes everywhere, but also space where bikes and e-scooters can be parked so they don’t become a nuisance in the future. It shouldn’t be difficult to live in a city.

I believe that, in the future, companies like Voi could potentially develop e-scooters that I can use despite not having vision. In the future, I see e-scooters as an excellent aid for people with different disabilities, people who today are struggling to navigate the city on their own. If I could take a Voi instead of taking a taxi, why wouldn’t I?