Anyone who owns a car in a city, or has dared to visit a city by car, knows that parking is always a problem. However, when you stand back and look at the amount of land that is actually allocated to car parking in cities, you will see that the problem is not just an individual one anymore. It’s an inbuilt one, and one that needs deconstructing in order to adapt to modern, low carbon times. Micromobility and shared e-scooters are part of that movement to modernise and regenerate our urban spaces. By changing the use of parking spaces to host shared e-scooters, we can see quick and immediate change.

In every UK and European city, hundreds of thousands of square kilometres of land have been covered in concrete for car parks or parking spaces over the years, be they for private or public usage. In London, however, just under half of householders don’t own a car, and the numbers are coming down all the time.

In Birmingham, as part of the Clean Air Zone introduced in June 2021, parking restrictions are being put in place in order to reduce pollution in the city centre. Otherwise known as Brum Breathes, we celebrate this breath of much needed fresh air in urban spaces. However, such moves also give cities a chance to lead on perfect parking practices, by opening up some of the spaces once dedicated to parked cars to shared mobility users.

As part of Voi’s commitment to clean, carbon-free urban spaces, we strive to be clutter-free. E-scooter users are not allowed to ride on pavements, and rightly so. However, by creating safe parking spaces such as dedicated racks or bays off-road, for members of the public who are opting to use carbon-free modes of transport, we can keep our cities clutter-free. While free-flowing e-scooters can also be parked safely on pavements, and we always promote this through our technology and rider education, there is clearly room for on-road parking options too. Cities have been able to create spaces for electric car charging stations and car club parking in a short period of time and so, by creating cocoons for e-scooters, they continue to build on their clean and contemporary urban visions.

We just need some space

Centre for London data  shows that parked vehicles across the capital take up well over 14km2 of space on our roads and streets. This, according to the Centre, is the equivalent of ten Hyde Parks. There are over one million paid residents’ and short-stay parking spaces, taking over 5,000km of kerbside space – not including uncontrolled kerb space that is free to park in at any time.

In July 2021, the UK’s RAC Foundation published a report that revealed most cars are parked 23 hours out of every 24. In Barcelona, 60% of street space is devoted to cars despite only 14% of the population using one regularly. In Copenhagen, considered by many to be the most bicycle-friendly city in the world, cars still have 66%  of road space despite only being used for nine per cent of journeys.

On average, up to 50%  of space in cities is dedicated to parked cars, and yet just one parking space could house between 10 and 12 scooters, which are actively being used throughout the day to transport citizens. Rather than sitting immobile. In contrast, e-scooters are definitely going places.

As champions of the 15-minute cities concept, a vision that makes it possible for city dwellers and visitors to get to most places they need to in just 15 minutes, we know that shared parking facilitates this change. We just need to flip a switch in the way we think about car usage in the cities. By placing state-of-the-art parking spaces for e-scooters around cities, in places previously claimed by cars, we create safer, sustainable spaces for people to live in and visit. From on-street public parking to off-street retail or leisure facilities, it only takes some paint, permission and parking racks to promote change.

Based on Voi’s modal shift data on e-scooter rides, we are able to calculate m² saved to date. For example, in the UK, we have freed up over 1.4 thousand m² of urban space by enabling people to leave their car at home – or even getting rid of it completely – and ride an e-scooter or e-bike instead. If you then consider that the average city has between two and 3.3 car parking spots per car registered, this means that for each person that does not own or use a car, 41m² can be saved. 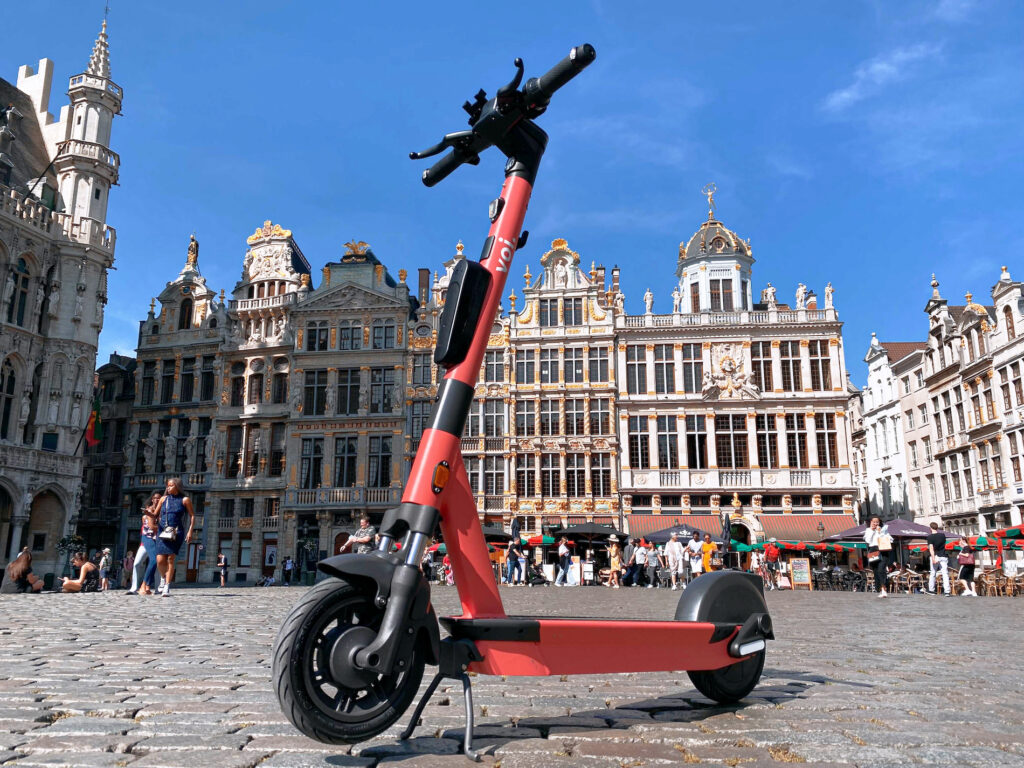 Give parking back to the people

Since 1990, Philadelphia in the US has been conducting parking inventories every five years. Led by improved public transport facilities and more space being given to walkers and other pavement users, the amount of off-street parking in the city centre has been reduced by about 3,000 spaces or seven per cent. Instead of causing a decline in economic activity, this has seen employment and retail business increase.

Zurich, Switzerland, already has a public transport system that works like clockwork. So it is not surprising that, as long ago as 1996, they put a cap on overground parking and moved a lot of it underground in the city’s main thoroughfares. At the same time, it became mandatory for the city to convert these once car-filled spaces to pedestrianised or low carbon transport zones. In Paris, the city has committed to removing 70,000 car parking places by 2025. In an interview with The Times, deputy mayor David Belliard said, “We can no longer use 50% of the capital for cars when they represent only 13%  of people’s journeys.” In addition, Paris also added 50km of new cycle lanes to the city during 2020/21.

Eh Voi-La. It is clear that cities are changing, but it is also important to remember that we don’t have to remove unnecessary parking spaces altogether. Indeed, the 2021 International Transport Forum Report showed that in cities where dedicated parking bays have been allocated for e-scooters, parking compliance has increased to near perfection. So we can regenerate our cities into safe spaces for e-bikes and e-scooters, keep our streets clutter and carbon-free, and our fellow footpath citizens feeling safe in their space too.