As one of the UK’s major port cities, Southampton is following the tides of change when it comes to sustainability and safety for its communities. As part of the Solent region, along with Portsmouth, Southampton was one of the early adopters of e-scooters when the UK trials were given the green light in spring 2020, opening up this city, with all of its fine marine heritage, to a new mode of transport.

We have certainly pinned our colours to the mast in Southampton, with over 30,000 riders who have taken close to half a million Voiages since we introduced the service in March 2021. This is also thanks to our having a close and mutually proactive partnership with Southampton City Council and the Solent Future Transport Zone to create a safe, sustainable service, Consequently, we are confident that it’s plain sailing ahead for shared e-scooters in Southampton.

It has been an honour and delight to chat with some of our Voi riders in the Solent region, as part of our first anniversary celebrations of operating there. They are suitably switched on to the sustainable and safety aspects that e-scooters have brought to their city. Such as Marcus below, who sums up the service perfectly: “I would describe Voi as freedom! In the decades to come, this will probably be seen as one of those pioneering moments!”

Southampton has also been pioneering when it comes to parking, operating Mandatory Parking Zones so that their already clean city will be clutter free. As a city that is bidding to be City of Culture in 2025, with the excellent strapline ‘Make it so’, they have certainly led the way in showing that there is a cultural shift in how we navigate our towns and cities in the 21st century. For example, along with Portsmouth, these were the first UK cities to install bespoke parking racks. With 172 of these sprinkled across Southampton they are indeed, making it so.

Our Voi rider Richard agrees, saying that Voi is “the best way to travel around the city… I’d say they’re reliable, they’re available because they are everywhere. They’re affordable! Everyone’s now on Vois, and it’s much safer.”

Having a strong infrastructure for e-scooters but also focusing on sustainable, active travel facilities for cyclists in the city has been a focus in Southampton. The council has, for example, launched ‘My Journey’, an information-rich website that is part of a ten year vision to transform the cycling experience in the city, bringing attention to their infrastructure improvements such as four clearly marked SCN (Southampton Cycle Network) freeways, which can also be used by e-scooter riders.

Safety at night is also important to Voiager Marian, a student at Southampton University, who rides Vois two or three times a week, and “especially at night. I find it a lot safer Voi-ing home than walking home.” With our firm commitment to safety, accessibility and gender equality in micromobility, as long as people are ‘Voi-ing’, we will be helping.

Taking a maiden Voiage from Southampton

To help those taking their maiden Voiage in Southampton, we have put in place many in-app and technical facilities. These include Beginner’s Mode, a facility where riders can skipper their scooter at a reduced speed of 10mph for all of their ride time. They can also take part in our online traffic school, RideLikeVoila as well as our online safety webinars. Or, as our rider James says: “Just give it a go, but go somewhere quiet. The speed is very manageable.” 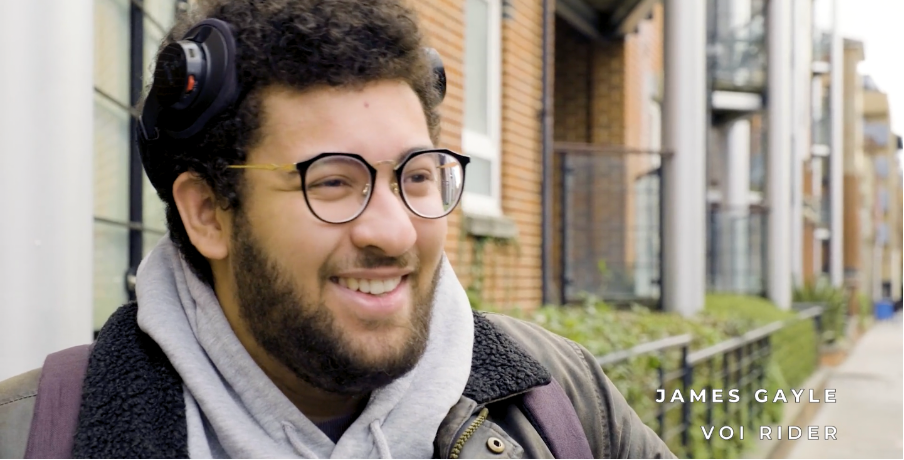