Voi is leaving this year’s Global Startup Awards, the largest independent startup ecosystem competition in the world, with the most prestigious award of them all: Global Startup of the Year.

Founded in 2012 and held annually in Copenhagen, Denmark, the Global Startup Awards celebrates the very best technology companies and the talented entrepreneurs behind them. Startups, which must be no older than five years, are nominated by the public before going through a rigorous jury selection process.

Voi was chosen from a list of 98 global finalists for the award which is given to the company that is delivering a successful product across several markets and is helping to innovate an entire industry. Previous winners include Pleo, UiPath, Zendesk and Supercell.

Since launching as Europe’s first e-scooter operator in 2018, Voi has transformed how people travel around their cities. Over 70 million trips have been taken on Voi’s bright coral e-scooters and e-bikes across 70+ cities in 11 countries, including Stockholm, Copenhagen, Berlin, Liverpool and Bristol. By encouraging people to use sustainable, carbon-neutral transport, Voi is helping to free cities from congestion, pollution and noise and create cities for living.

Recently Voi pledged to become climate positive by 2030. It plans to achieve this by reducing more greenhouse gas emissions than its value chain emits and by helping people to replace over 1 billion car journeys by 2030.

Douglas Stark, COO and co-founder of Voi, said: “We are honoured to have been named Startup of the Year at the Global Startup Awards. This award is in recognition of the hard work of our skilled employees and also underlines the role that companies like ours can play in driving the green revolution in European cities. There is an overwhelming need for innovative transport solutions across the world if we are to reach ambitious climate targets and create more efficient, liveable cities. This is something we’re committed to achieving with our e-scooters and e-bikes at Voi.”

Kim Balle, founder and director of the Global Startup Awards, said: “Voi have won the award because their electric scooters have managed to create better, greener and more cohesive transport in many countries. With electric scooters in over 70 European cities, Voi has become a great success in a very short time, because they meet the growing demand for innovative and sustainable means of transport. Voi is in many ways a great inspiration for other startups and we congratulate the entire organisation on this award.”

Mik Strøyberg, CEO and co-founder of Good Monday and jury member of the Global Startup Awards, said: “Voi is a frontrunner of climate-neutral mobility and making cities pollution and noise-free. With cities aiming to reduce emissions, Voi is paving the way and creating new standards.”

Check out all the winners of Global Startup Awards 2021 here! 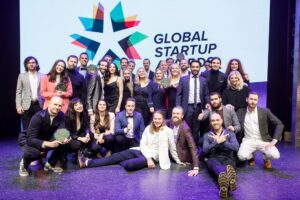