Things were definitely moving and shaking at our booth at MOVE 2022, in London UK this week, with delegates, visitors and fellow exhibitors passing by to find out more about our Voiage. In particular, the new Voiager 5 model proved very popular with people booking up to try it out on the exhibition’s track, which was a great addition this year, giving people a space to actually ‘move’ and not just talk about it.

Micromobility as a catalyst

We were also delighted to have our Chief Operating Officer and co-founder, Douglas Stark, give a keynote address as part of MOVE’s impressive programme of talks and panel discussions. Douglas’ address was entitled “Micromobility as a catalyst: pushing urban environments towards the future”, where he honed in on our vision: cities made for living. “I love cities, cities are super important,” Douglas said, “but they need to change…because today there are 1.4 billion cars on earth, but the global car fleet is estimated to grow to a staggering two billion by 2030.”

Our vision for Sveavägen, Stockholm

As part of his vision for micromobility as a catalyst for change while cities continue to grow, Douglas shared a striking image of the street where our head office is located, one of Stockholm’s main thoroughfares, Sveavägen, transformed from its current car-dominated boulevard to a green one and where Douglas states: “We believe that this is the future. Today, 50% is given over to cars and we would like to flip this around and make 70% of the street accessible for people and not for cars. We have done this for several cities and we will continue to do this to help cities realise that we can’t have two billion cars. Because we do have incredible alternatives to car transportation.” 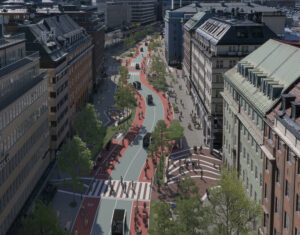 How collaboration can reduce private car use

Douglas went on to take part in a roundtable discussion on micromobility and public transport, which focused on recent research into how collaboration can reduce private car use. He shared this panel with Espen Strand Henriksen from Kolumbus AS, Giancarlo Oranges from VAIMOO, Jan Tore Endresen from ShareBike and the session was chaired by Rachael Murphy from ComoUK.

When asked ‘what can we do to improve collaboration and, therefore, create a modal shift away from cars?’, Jan from ShareBike said: “You need a stick and not just a carrot. In Oslo, we have a lot more cycling now, but that is mostly due to the stick…but we work towards the carrots too! The lack of competence is often a problem. I think that if you want to see rapid development, you want to boost confidence in councils and cities.”

Douglas Stark highlighted research carried out by us in Stuttgart which showed that, by collaborating with public transport providers and integrating shared micromobility into the local public transport system, it can help increase public transport ridership. Our research showed an increase in rides with shared e-scooters by 250%, which contributed to increased train ticket sales by 35% during the pilot period. Rachael Murphy concurred, highlighting that in recent ComoUK research, “we found that 70% of bike share users were using it in combination with other forms of transport.” 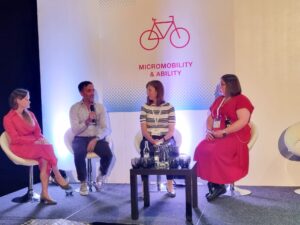 During this discussion, there were several references to cities needing to become more competent in order to fully engage with shared micromobility, and Douglas responded to this with encouraging words about how Voi has all the experts needed to help upskill local authorities: “Part of our Voi DNA since the start,” Douglas stated, “has been a close city dialogue and it is fundamental to the work we are doing. So we have experts in sustainability and service design, but also people working in communications with the cities. This enables us to communicate with cities all the time and help with all the things that they care about. This is the European way, in my view, using good dialogue and communication.”

Matthew Pencharz, our Head of Policy for UK, Ireland and the Netherlands also took part in a roundtable discussion entitled, Data, not anecdotes: micromobility regulation & standards that work. This session was chaired by Leah Hockley from Intelligent Transport, and Matthew shared the panel with Marian Kelly from Transport for London and Kate Barnes from Tier Mobility.

The responsible and democratic use of data by micromobility companies is a lively topic and it was clear from all panellists that our skills in gathering data can support cities and all stakeholders who want to create better cities for living. In discussing how data can be used efficiently and effectively, Matthew said: “As operators, we have experienced decision-making swayed by anecdotes. For example, relatively few complaints about e-scooters can influence decision-making, which is why we support the use of objective data.”

Kate Barnes from Tier concurred adding: “Data is key and, when we revert to data it encompasses a lot of things. It can tell us so much about the mobility needs of a city, but also about the barriers in achieving modal shift.”

Matthew dug deeper into this important topic, stating that “it is frustrating but not surprising that data gets reported inaccurately. But we also use data to share positive stories about how we are affecting climate change, for example, and we have a role to constantly push out the message.”

We continued to push this message of how micromobility can create better cities for living, support their crucial move towards net-zero and also reverse our age-old dependency on cars. It’s time to MOVE, and this event gave us a great platform to discuss the ways in which we, at Voi, are making that movement happen.