Since Day 1, Voi has been teaming up with local NGO’s across its European markets to retrieve lost vehicles from the water and raise awareness around the environmental issue with litter, not just on streets, but also on seabeds. During the weekend, such an event was hosted by Rena Mälaren and Keep Sweden Tidy in Stockholm, where 25 volunteers including 8 divers collaborated in retrieving over 5 tonnes of waste from the seabed.

Voi’s partner Rena Mälaren is a Swedish non-profit water rescue organisation founded by Fredrik Johansson, with more than 300 volunteers in the network that perform cleanups on a weekly basis. Since inception, the organisation has retrieved more than 200 tonnes of litter from Swedish seabeds while also highlighting the issue of water pollution in the media to urge more people and organisations to take action. Present at the event was also the Keep Sweden Tidy Foundation, handing out litter bags and supplies for volunteers who wanted to support the cleanup event on land. Since 2020 Voi has been sponsoring Rena Mälaren water rescue events financially and and with employee volunteers. At the event hosted 17 September, Voi also provided volunteers with free Voi Day Passes so they were easily able to expand the area where they could clean up.

“By partnering with these organisations, we hope we can help highlighting the environmental issue with litter and inspire people to feel a stronger sense of collective responsibility for keeping our cities and seabeds free from waste” says Caroline Hjelm, Head of Marketing at Voi who also volunteered at the event over the weekend. 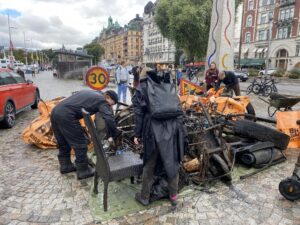 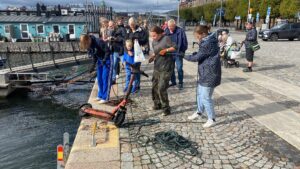 25 volunteers, including 8 divers and several people pulling up heavy items using ropes, collaborated in retrieving 5,1 tonnes of litter at the Saturday event.

At this diving event, which took place along Nybroviken, Strandvägen and Gallärvarvet in Central Stockholm, 5,1 tons of rubbish was retrieved from the seabed including items like boat batteries, traffic signs, shopping carts and a safety deposit box. A staggering 61 e-scooters from different micromobility operators were pulled out of the water. Voi’s e-scooters were retrieved from the location by our fleet management team the same afternoon and transported to the Stockholm warehouse where they will be examined and restored.

“Every Voi counts. We hope to refurbish as many scooters as possible and salvage spareparts than can be reused. Materials that can’t be used for safety reasons will be recycled. At the same time, our preventative work continues to make sure the e-scooters don’t end up in the water in the first place. In collaboration with Rena Mälaren and the City of Stockholm, we’ve already made it impossible to end your ride close to the water but we also need to continue educating the public on the negative impacts of vandalism and seabed littering” Hjelm continues.

Have you witnessed e-scooters being thrown into the water or other forms of vandalism on our fleet? Please report the incident in the Voi app or by e-mailing [email protected] 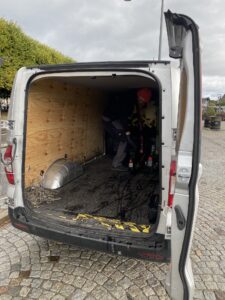 At the end of the day, Voi’s fleet management team retrieved Voi scooters pulled from the water and transported them to the Stockholm warehouse where they will be examined and refurbished.